The van is falling apart.. I’m picturing in my head how the weal is falling off the van, going in a different direction, while the metal is making ugly sound by scratching the road, everyone’s screaming (me the most) and we are ending up on the right side, in a ditch. Our yellow colored van is falling apart and I’m feeling every hole on the road. I can’t help myself with these paranoid thoughts. I think I’m the only person in the van who’s thinking – AAAA this is the last time. I was always afraid of traveling on those roads. 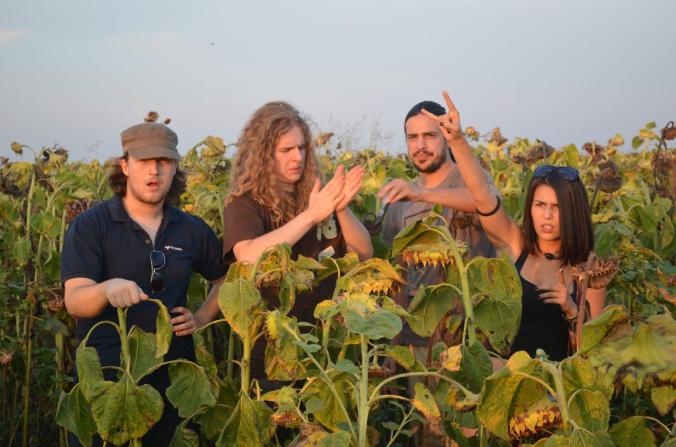 The rest of the band is here, and of course, our driver. They are having fun, playing acoustic guitar on the back, laughing, yelling, changing music after every 2 songs, drinking some cheap whiskey (or whatever they brought) but I just want to talk about the set list for the concert tonight. No one is taking me serious! Maybe I should relax a bit.

I like festivals, you always meet other people, stage crew, crowd is always amazing. The sets are short but that’s the only annoying thing. And yes, you walk a lot! And the toilets…let’s not talk about the toilets.

Anyhow, festivals by my opinion represent the true meaning of the word freedom. I put my cowboy boots, almost 10 years old, made of pure leather, and walk, and jump, and dance, and kick some empty bottles which comes on my way. I always have a backpack on my shoulder and small bag tied around me as a belt for the documents, cigarettes and money. Every time I performed on the festival I never stayed in the backstage. The only moments I spend there is when it’s our time to perform.

When we arrived (alive and happy), the first thing you see is the stage where you will perform that night. The excitement is rising in my veins. My band and I were practicing my songs for a week. Why only a week? Because we got together a week ago. I got the call then from the manager of the festival and he said to me – You must perform. Get the musicians and make a band. (Thanks, Mladen) So I did that, I made some calls and in a day, I had a band to perform with me. Arion, Petrovic and Bane. What a characters.. crazy people, including me..

The sound checks are always silly, the band is making all cacophonous sounds you can imagine, the sound technicians are all around you, talking to the producer standing on the other side of the field and they don’t understand each other. You start to play a song and in the moment you got warmed up they cut you, to tell you something and then again.. you play, get excited and they cut you.. and then again and again…. until you get there – where the sound of a band should be.. 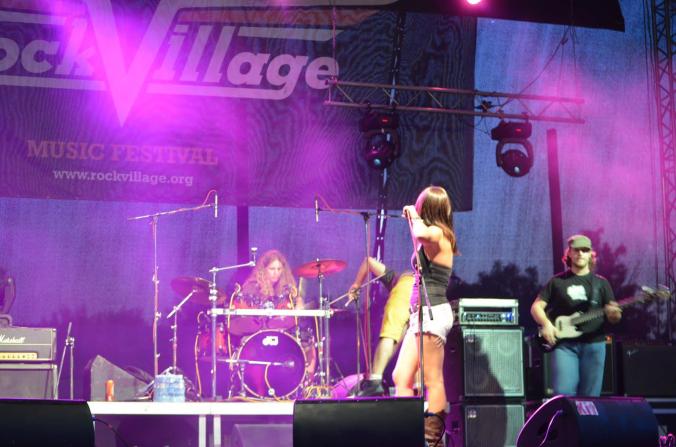 We finished with the sound check, and everyone separates and goes in a different direction. Some of them are chasing some booze, others are chasing some chicks. I usually go with those who are chasing the booze, because the ones who are chasing girls doesn’t really want another girl around. The next time we will meet is when we should have to get on the stage.

Now it’s really warming up.. I’m going around, meeting people, listening to the bands who started to play, looking around, trying to find some good spot where it’s not to loud and not to low. Drinking, dancing, sitting on the grass… OMG, I love grass so much.. every kind of grass – wet, dry, burned grass.. It makes me relaxed.

I’m not relaxed because we learned 10 songs in those 7 days and I don’t know how that will sound when we start to play. Also, this will be the first gig I have with my originals.

In one moment stage manager came to me to say to get my bend members and get ready to perform. Now’s the time to go to the backstage. And where are the fuck my band members?? This is the moment when I chase them around and become a paranoid boss who’s always told the same sentence- “Relax man, I’m coming.” Yeah, I can be also annoying. 🙂

In the backstage you have a fridge, some technicians, groupie girls, plastic glasses, few chairs and a lot of cables, processors, guitars and drum sticks which looks like a weapon. And a gun… A fake gun my drummer took from someone… He said – I will turn it back when we finish the gig. (but he didn’t….)

You get up on the stage and then you have a black out. Some kind of amnesia.. I just can remember a few things- I was head-banging that much that I couldn’t move my head up and down for days after, my guitar player untied his hair, some drunk people in the first line making a mosh pit, I was saying some nonsense between the songs, my drummer was looking like a Cousin IT with his hair and I slide on my knees and made scars for the rest of my life.

We got of the stage, looked like we took a shower, of the sweat, happy and euphoric. In this moment everyone is approaching, shaking your hand, singing some parts of your songs, happy and grateful because of the energy we brought on the stage..

The rest of the night usually you spend walking around, listening other bands until some late hour when it’s time to go home.. But we made a different plan this time.. My drummer noticed while we were driving that there is performance of some the most shitty, trashy singer few streets away.. Vendi… So we decided to have fun and visit the place..

It was a mess. The almost naked singer, tables under the tent, drunk and fat people, everyone is on the stage with that “lady” catching her breasts, her ass, singing along with her (if we can call that singing), spilling drinks on her, and that all is happening on the table! Gross! In one moment, police came… I was thinking they will break the party, do something about this Sodoma and Gommorah… but no.. they just ordered drinks. That was even more funny.

We were about to leave, and the police stop Arion, our drummer..

The cop took the toy. We went out and Arion was worried about the kid, from who he borrowed the gun, what to tell him.. I went inside to try to talk…

“Listen, we didn’t want to scare anyone. This is the toy of one boy and we borrowed it. We just want to bring it back to the boy. Can you please give me the gun?”

“Did you know that you could cause a chaos here with that toy?”, says the cop.. Stupid cop..

“Yes I know, and I know it looks quite like a real gun, but it isn’t and we were about to leave when you stopped us.. Please, I don’t really want to make that kid sad because we lost his toy..”

“Ok.. and what would you do for exchange if I give you the toy?”… I WAS SHOCKED! What the heck? Is this really?

“I can buy you drinks and give you the tickets for our next concert?”, I said

“Ok, you can take it, but please hide it when you go outside…”

I took the fucking gun, and went outside.. Arion was happy, and the kid was happy and they lived happily ever after..

Sadly, I don’t have any video from that festival, just those pictures you see, but I want to show you another video of the band Sharks, Snakes and Planes, performance we had in Brcko. Those people became my really really good friends and we traveled few times on the similar festivals to perform. Their band leader, Mladen, is the one who called me and convinced me to make a band and to perform on Rock Village Festival, 2012 year. That’s why I want to post this video and to show how grateful I am for the support that he and the band Sharks Snakes and Planes gave me as a band and as friends. ❤